Created 6-Dec-21
9 photos
Light relies on well developed eyes. We see only a small selection of the light around us. Many animals, especially insectia see light very differently to how we see it.

Many galaxies and universes exist in total darkness and it may be that some of my energy dissipates across the cosmos into one of these.

The path the light chooses to take forms predestined patterns that even we a can calculate and predict. This is not dissimilar to the path a celestial body might take circumnavigated get its orbit around a body of greater mass. Slowly but surely the orbits are reduced as it is pulled further and further towards its bigger brother until inevitably gravity pulls it into a catastrophic collision.

The trails of light form a web around the subject. One is then forced to take sides. Is this web designed to entrap and hold the subject, the light trails forming the bars to an ephemeral prison, one where escape is futile; leaving the captive longing for the lightless galaxies so far from reach. Or are the paths of light forming a woven cocoon designed to protect rather than constrain the subject. One where the pitch darkness is kept out, protecting the occupant from the deep blackness of emptiness.

Perhaps this is a visual representation and manifestation of the subject's aura. Do the colours differ with the subjects moods, feelings and emotions? Does it reveal ones innermost thoughts and desires, ones that we are unwilling, or at best reluctant to reveal to everyone. Some so dire and despicable that the earth itself would be reft apart at their revelation. Would our deepest loves and hates be known and chronicled so that generation after generation would recite out most perverse revelations. 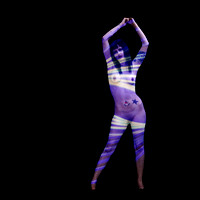 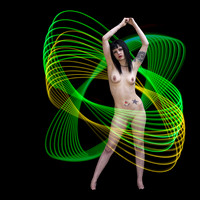 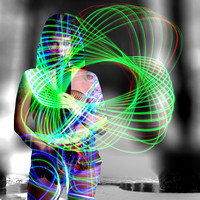